Please join us as we return to in-person talks in the cinema space at Hallwalls Contemporary Arts Center!

*Following the University at Buffalo’s on-campus protocols, attendees are asked to kindly wear masks regardless of vaccination status. This event will be simultaneously live-streamed. CLICK HERE to watch the live-streamed video feed.

Medieval Portuguese song was composed by men but often performed by women, and both literary and musicological evidence indicates that these performers had significant latitude for dramatic and melodic improvisation. In this talk, Berlin will first explore different methods for recapturing, from the distant past, performative aspects of meaning that go beyond the text and images of the manuscript page. Here, historical, poetic, and philosophical approaches to voice, repetition and improvisation, and gender will be central to reinvigorating the perennial question of the relationship between words and music. He then will turn to the revoicing of these songs by modern poets such as Fernando Pessoa and Fiama Hasse Pais Brandão, who found in them competing strains for the conceptualization and critique of Portuguese colonialism in Africa. 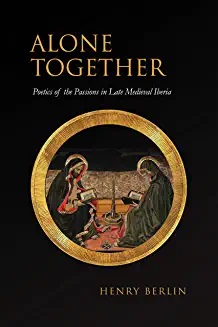 Henry Berlin studies medieval literature in Spanish, Portuguese, and Catalan, with a focus on the history and theory of emotion, lyric theory, and, in his most recent work, repetition and improvisation as they relate to gender and the discourse of empire. He is the author of Alone Together: Poetics of the Passions in Late Medieval Iberia (Toronto, 2021) and is currently working on an edition and translation of King Duarte of Portugal’s Leal Conselheiro (Loyal Counselor). His articles have appeared in venues such as La corónica, the Journal of Medieval Iberian Studies, and Hispanic Review, and he is Associate Editor of Catalan Review.