The 1970s, a period that Tom Wolfe dubbed the “Me decade,” is a time most often remembered for anti-war protests, disco music and Watergate. But it also was a time of tremendous artistic innovation. Buffalo was a hub of creative activity in poetry, music and community collaboration, and this year’s Gray Matter Event will honor this UB‐Buffalo legacy. With audio clips and a slide show, The Humanities on Main Street: UB in the 1970s will kick off with a reception at 6pm, followed by a panel discussion featuring three distinguished speakers: Mark Shechner, Emeritus Professor of English, will speak on the local poetry scene; Michael Frisch, Professor & Senior Research Scholar of American Studies, will address campus politics; and Renee Levine, managing director of the Center of the Creative and Performing Arts at UB from 1965‐1978, will speak about the UB Music Department and its avant-garde legacy.

Following the panel discussion there will be break-out sessions with Renee Levine (Music) and Michael Basinski (Curator of the Poetry/Rare Books Collection at UB), who will bring in a sample of the “little magazines” from Buffalo’s poetry scene in the seventies. Don’t miss a memorable night devoted to Buffalo’s important history of artistic innovation and its continued vitality today. Saul Elkin has been teaching Theatre at the State University of NY at Buffalo since l969 and served as Chair of the Department from l967-85, and again from l988-l99l. He began his career as a child actor in New York City. In the years that have followed, he has acted in or directed over 250 productions on and off Broadway, in films, in summer and regional theatres, and briefly on the soap opera “Edge of Night”. He was the first UB recipient of the Chancelor’s Award for Excellence in Teaching and is the founder and Artistic Director of Shakespeare in Delaware Park. He holds a B.A. and an M.F.A. from Columbia and a Ph.D. from Carnegie-Mellon University. In 1995, his name was placed in the Western New York Theatre Hall of Fame. He was honored with the title of Distinguished Service Professor in 1996. In 1998, he was honored by the Arts Council as “Outstanding Individual Artist of the Year.” He appears frequently as an actor in area theatres. He served, again, as Interim Chair of the Department of Theatre & Dance in the Fall 2000 semester. Our first presenter in “Gray Matter” was SUNY Distinguished Professor (Emeritus) in Visual Studies, Harvey Breverman. Dr. Breverman is a graduate of Carnegie Mellon and Ohio Universities, and has exhibited in New York, Toronto, London, Amsterdam, Oslo, Paris, Bologna, Moscow, Basel, Barcelona, Cracow, Belgrade, Rome, Milan, Vienna, Honolulu, Tokyo, Caracas and Rio de Janeiro.  He has had eighty-seven solo exhibitions.  In New York he has been represented by Associated American Artists Galleries; FAR Gallery, Nardin Galleries and Babcock Galleries.  His works are in the collections of MoMA, the Metropolitan, the Whitney and The Jewish Museum, New York; Albright-Knox Art Gallery, National Museum of American Art, Library of Congress, The British Museum, and the Israel Museum.  He received grants and awards from the Tiffany Foundation in 1962, the Netherlands Government in 1965, NYSCA-CAPS in 1972, The National Endowment for the Arts in 1974 and 1980, and the American Academy/National Institute of Arts and Letters in 1980 and 1981.  He participated in International Print Biennials in England, Norway, Spain, Taiwan, China, Japan, Finland, Poland, Bulgaria, Macedonia, Italy, Germany, Egypt, Thailand and Turkey.  Breverman has been a visiting artist at Brigham Young, Illinois State, Michigan, Indiana, Skidmore, Maryland Institute, Oxford University’s Ruskin School, Pont Aven School of Contemporary Art, France and Jagiellonian University, Poland.  A recipient of the 2003 Distinguished Teaching of Art Award from the College Art Association, he was appointed in 1999 to the rank of SUNY Distinguished Professor at the University at Buffalo. 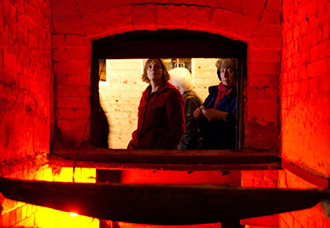